You do not want to waste time with little Walleye 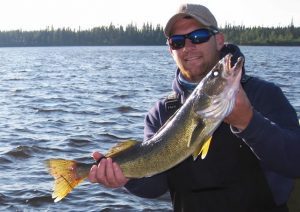 As soon as the ice starts to break up in the spring the Walleyes start to spawn. They will congregate either in places with current, or where there is sand such as a beach or a sandbar. This time of year they are using a lot of energy so they are very hungry and aggressive.

Even when they are not hungry they are in a spawning frenzy and will attack anything that comes into the spawning areas. With this in mind bright obnoxious colors such as Fire-Tiger, Red, Yellow and Chartreuse work well. Casting shallow running Rapala and Thundersticks in the current or along a sandy area will produce Walleye after Walleye.

In the sandy areas you can also cast light jigs such as a 1/8 oz with a twister tail. The Walleyes are shallow and will be in 1 to 3 feet of water and along the shore or in the current. You can use jigs in the current but generally the areas with current have lots of rocks and you end up losing too many. Jigs are fine if you are fishing the deeper sections behind the current. 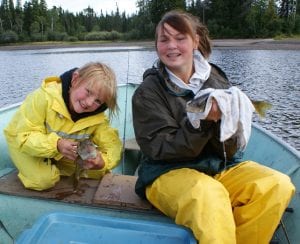 On the Attawapiskat River the obvious place to fish in early spring is in the current and actually the Walleyes will stay near or in the current all year or migrate back and forth between areas of current. In the spring the smaller males will stay in the rushing current all day and night so they are easy to catch at any time.

The big females tend to back off into deeper swirling holes below the main current during the day. If you want to try after bigger Walleyes during the day put on a jig or a deeper running lure and fish the deeper darker water. As the sun starts to go down the big females come right up in the shallow current. Some of the biggest Walleyes get caught in water that is only a foot deep. You can still catch big trophy females during the day in the shallows but if you are specifically looking for big Walleye try the deeper water.

If it’s early spring and you are fishing one of our camps that are not on the river system it’s best to stick right close to shore. The Walleye will be in large spawning schools so the first place you want to investigate is a sandy area or a place where a feeder stream is coming into the lake.

The best way to cover ground is to troll really close to shore and once you get into them you can stop the motor and start casting. You don’t want to keep trolling back and forth over the same area or you will spook them. 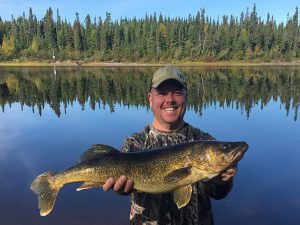 The most popular method for catching Walleye north of Nakina in the summer is using a white unscented twister tail on a jig. In the far north scented baits do not work well. Salted baits work great but Walleye in the north are not enthusiastic about artificial scent. It’s best to buy unscented twister tails. In the spring the Walleyes are so aggressive that you will see non-stop action no-matter what you use.

The best thing to do is when you clean Walleye for lunch or dinner cut out the gullets and save them. Walleye gullet is the arrow-head shaped translucent flesh under the bottom jaw. It’s very smelly and drives Walleyes crazy. You can put a tiny piece of gullet on your jig or you can scuff it up with your knife so it is oozing liquid and rub it on your lures. Having gullet scent on your jig or lure will double the amount of strikes you get.

In the lakes that are not on the river system you will find Walleyes off rocky points, on the edge of weeds and right in the weeds on bright afternoons. They will also be around shoals or just outside the opening of a narrows between two bodies of water. If you are not catching Walleyes in an area like this it most likely means a big Northern Pike is hanging around feeding on the Walleyes so they are very timid when afraid of being eaten.

On Beteau Lake and other lakes on the river system the Walleyes will migrate between areas where there is current. They will travel along the shore and going into small bays to feed. Hit the points leading into bays or if the bay is weedy but still has a depth over 6 feet you can sink your jig right down between the weeds.

The bigger Walleyes will be at the points leading into the bay or in deeper water just off the line of weeds. If you are drifting by a rocky point and you hit Walleyes chances are as you drift out over deeper water the smaller Walleyes stop hitting. This is when most people move the boat to drift past the point again.

What you should be doing is dropping your jig down deeper. The big Walleyes usually like the deeper water during the day and can sit down 15 to 20 feet deep. Again a jig with an unscented white twistertail and a tiny piece of Walleye gullet or worm is the best bait. 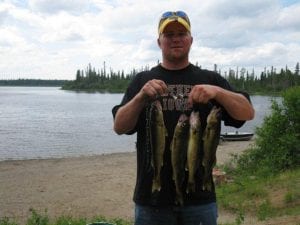 Hot sunny days with no wind would traditionally be the worst conditions for Walleye fishing. The Walleyes will go right down to the bottom and just sit there. In this scenario you can drop your jig and let it sit on bottom and every few seconds give it tiny jigs of 2 or 3 inches just to make it look like a bug crawling on the bottom of the lake. As soon as you feel any weight set the hook. In these conditions Walleyes are not very aggressive and become very lazy and you basically have to keep the jig right in front of their face for them to strike. If you are at one of our camps on the Attawapiskat River it’s best to head straight to the areas with river current as the Walleyes will be much more active. 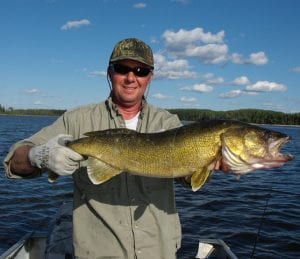 By mid-August the weather starts to cool down at night. This is when weeds in the back shallow bays start to die. When the weeds die and start to decompose, they absorb oxygen and start to release sulfates, which the Walleyes don’t like. As a result the Walleyes will migrate to areas with current or in the case of the lakes that are not on the river system, they will migrate to rocky points and rocky shoreline where wave action creates more oxygen. Walleyes are less aggressive and tend to go after more natural colors such as silver and black, brown and black and perch color.

White twister tails on a jig are still very effective but the bigger Walleyes generally will be more active in the evening. Mid-August going into September is a great time at catching a huge trophy Walleye. Right before dark until about an hour after dark the huge trophy females will come out from hiding and go right up in the shallows.

The perfect spot is where a sandbar or sandy shoal drops off into deep water. Trolling very slowly in about 2 or 3 feet along the shore or casting in the river current with a blue and silver jointed Rapala with produce some amazing size Walleyes.

Deeper Walleyes: The big females will often hide in deeper water during the day so back-trolling very slowly with a 3-way swivel and a worm harness with a big fat worm in the deeper water about 30 feet from shore will produce the big ones. 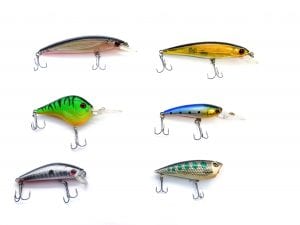