Fly-in fishing and hunting trips with us feels like you have reached the edge of the world!

Far into the extreme northern wilderness of Northwestern Ontario and way past all the other lodges and outpost camps north of Nakina, is Gray Wood Outfitters. Gray Wood is your dream trophy Moose, Bear, and Pike fishing destination. It takes a special breed of person who craves adventure without limits to experience Ontario's last wild frontier. A fly-in fishing or trophy moose hunting trip with Gray Wood feels like you have reached the edge of the world. Our business goal is supplying you with an oasis; an unexpected level of comfort in an otherwise wild and remote environment. The reward for making such a journey to our location is access to incredible Pike and Walleye fishing, and some of the best trophy Moose and Bear hunting opportunities Canada has to offer.

Far into the extreme northern wilderness of Northwestern Ontario and way past all the other lodges and outpost camps north of Nakina is your dream hunting and fishing destination. It takes a special breed that craves exploration and needs adventure without limits to experience Ontario's last wild frontier. A fly-in fishing or hunting trip with Gray Wood feels like you have reached the edge of the world. Our goal is simple, to supply you with an unexpected level of comfort in an otherwise wild and remote environment. The reward for making a journey to this remote location is access to some of the best fishing and hunting Canada has to offer.

What a great fishing trip we had on Beteau Lake. Weather was a bit tough, but the awesome fishing and cozy accommodations more than made up for it. Lots of big pike, with 2 over 20lbs, and some impressive walleye in the 26-28 inch range, and constant action for smaller ones + as a bonus, moose, bald eagle, osprey and river otter sightings! Cabins and boats were great, especially when considering just how isolated the camp is. Already talking about planning another trip.

The facilities were great.  We would return again. Tough weather week for hunting. Fishing was excellent for pickerel. Would recommend it.

We had an excellent experience with Gray Wood Outfitters Oct.3rd to Oct.10th 2020. First rate service from initial consultation to getting us to Blackbirch camp and back. We got a beautiful Moose and more fish than we could count! I would not hesitate to recommend Gray Wood Outfitters for your next Fly-In trip. 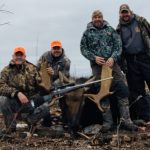 Comfortable up to date camp!

Had a lifetime memory trip to this very remote but comfortable and up to date camp. Unbelievable Walleye fishing with numerous catches in the 2 to 7 lb range & several monster Pike in the 38″ to 42″ range. Our host never stopped working at making sure we were looked after. Can’t wait for next year. 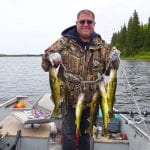 “We had an amazing time! Great hunting, peaceful lake, no one for miles!”

“Took the family up and we all had a great time. Even the kids caught fish! We’ll be back next year – thanks!”

Looking forward to next year!

Overall, this was BY FAR, the best fishing trip that I & my 4 fishing partners have ever had! Thanx to all.

Air travel, provided by Nakina Air Service was great for our trip, which ran from 27 AUG – 4 SEP 2021.The camp itself is accurately depicted on the web site and cabins were clean, appeared well maintained & laid out to easily accommodate at least 8, although there were only 4 in our party. All the appliances, including full size frig, stove/oven, freezer & propane heaters in the kitchen & cabins worked well, along with the satellite TV.  Wifi also worked. Elec power was provided by Honda generator & worked flawlessly.  Shower caused a problem toward the end of the trip but a new pump was installed by Wayne (Camp Caretaker) & issue was resolved. Although he just arrived at Beteau, Wayne was, in a word, incredible!  He is a “jack of all trades” & master of many!. A real “keeper”!! Boats were 14 foot Lunds or equivalent with new 15 HP Mercury motors and were excellent.

Now to what you are wondering.  HOW WAS THE FISHING????  In a word AWESOME!!!  The river was VERY low, which created some challenges, but also probably served to “consolidate” the fish some.  Anticipate that higher waters  in the spring would open up lots of additional water to fish, especially bays which during our stay had only a foot or two of water & were essentially not fishable (but don’t think there were many fish there anyway).We caught 450+ Northerns & 250 Walleyes. Had we targeted Walleyes, I’m sure those numbers would be reversed. Additionally,   If anything, these numbers are conservative as it is very hard to keep track of things like this, but we did our best.  The walleyes averaged ~17+ inches, with the biggest at 24.5 inches.  Lots of 19s thru 22s.  We caught most of them within no more than 5 minutes from camp & primarily fished for them when we had fish on our menu.  The majority of the fish were caught within about 5 minutes or so from camp.  We caught  8 x 40”+; 5-6  x 37”+; a bunch in the 34”+ range as well as many over 30”.  Within a 2 hours the first afternoon, I caught two 40″+.  I’ve been on 15+ trips to Canada without a 40″+ & I got 4 myself!  Both the Northerns & the Walleyes were exceptionally healthy-looking fish, especially heavy for their length & put up fantastic fights. Perhaps that comes from living in & fighting the river current vice living in a lake?? I have no idea of how many fish we lost but there was a bunch & some were real monsters too! All the Northerns were released in accordance with Camp policy, which has always been our policy as well.  Adam Wood of Gray Wood Outfitters, texted several times to ensure that all was going well & see if we needed anything. His level of interest is commendable & I’m confident that if a quest needs something that he & the other owners will expend whatever is necessary to resolve any issue(s) that may arise.  Overall, this was BY FAR, the best fishing trip that I & my 4 fishing partners have ever had!  Thanx to all.