You do not want to waste time with little Pike

Northern Pike are easy to catch and hit just about any lure. When you are flying into a remote region of Northwestern Ontario that has the best trophy Northern Pike fishing in Canada you do not want to waste time with little Pike. The trick is knowing how the big trophy Northern Pike behaves and where they will be to maximize your chances at catching one of these monsters.

It doesn’t matter if it’s spring, summer or fall; huge Trophy Northern Pike get caught at any time of year at all our camps. This might not be true for big deep lakes because in deep lakes the Northern Pike start to go deep around the beginning of August and are very hard to locate after that. You don’t have to worry about that here because our lakes do not exceed 20 feet deep.

By the time the ice has cleared off the lake, enabling the floatplane to land, the Northern Pike have already finished spawning and are now focused on eating Walleyes. At this time of year the water is high and the big Pike will go right into the bushes and hang around the shore where they have cover and can ambush unsuspecting Walleye.

They will also sit in the deeper pool behind current where they pick off small Walleyes that venture out of the safety of the shallow rapids. Casting DareDevils, spinnerbaits, crankbaits or even a big #4 or #5 Mepps Muskie Killer (Bucktail Spinner) will get the big ones.

Migrating up and down the river 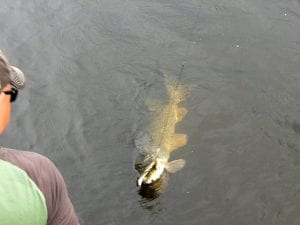 In late spring before the weeds grow thick and when the Walleye are finished spawning they start migrating up and down the river and through the lake looking for food. This is when the big Pike take up ambush positions. Large Northern Pike are ambush predators. They like to pick a spot where the feeding is good and stay there until chased out by a bigger Pike.

As we said in our Walleye tips page, the Walleyes are constantly migrating between areas with current and will follow the shore going into bays to find minnows. The big Northern Pike will wait for them at the points leading into bays. The big Pikes also hang around narrows where the Walleyes are migrating through or will hang around under-water ridges and attack from below. Keep casting lures into the areas. 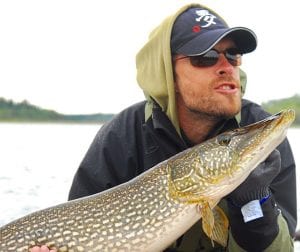 In the summer the weeds have grown. In our area the primary weed cover is Lily Pads, Wild Rice, Spider Legs, Pickerel Grass and Muskie Cabbage. Small Pike hide in these weeds as well as minnows that the Walleyes are feeding on so big Pike will also hide in the weeds where they can ambush their prey. Casting weedless spoons like a Johnston Silver Minnow or a weedless Thompson spoon is effective.

Thick weeds are why fly fishing for Northern Pike is getting so popular. With a fly-rod you can drop a big Pike fly in little pockets of open water in the thick weeds, which is an area that’s annoying to fish with a conventional lure. Barry Reynolds Pike Bunny, Rabbit Strip Pike Bunny, Mcmurderer and the Red & White Pike Fly are by far the most popular flies for Northern Pike.

If you don’t like fly fishing then you need to lure the big Pike out of the weeds. There are two ways you can do this. First you can try surface lures which make lots of noise. Spooks and Jitterbugs or old floating plugs with spinners work great. It takes time to get a big Pike to finally come out of the weeds to see what all the commotion is about. If you cast too many times then the pike will not be interested or may get spooked. You need to wait 15 seconds or more between casts. When your surface lure hits the surface, try jerking it instead of reeling in to make it look like a wounded critter on the surface. A big Pike may look at your lure for a while before deciding to hit it.

A second way to get big Pike out of the weeds is lure slapping. If you cast out a pike spoon such as a DarDevle try to cast up high and then when your lure is about 6 feet above the water give it a sharp jerk so it slaps the water. Northern Pike love that slapping sound and it will trigger a response. 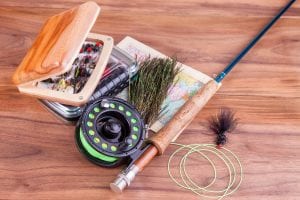